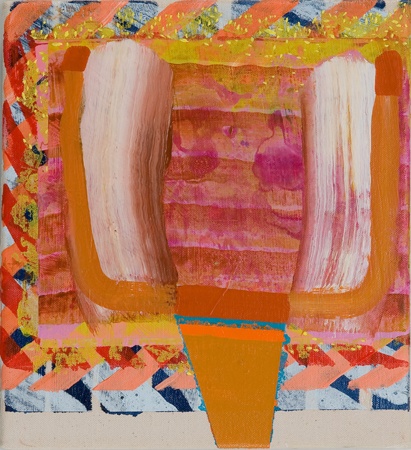 These paintings all begin with a basic, hand drawn grid. This preliminary grid is both a matter-of-fact reiteration of the canvas’s flat surface expanse and an idealistic referent to an imagined and unseen reality existing congruent to the one I live and breathe each day. To draw that last thought out further, I believe the world around me consists of more than what is seen, and though I do not KNOW concretely what more might exist, I invent a visual possibility through painting. The act of painting becomes a means of accessing and revealing that unseen reality. Some questions that imaginatively situate the images while I work: What if all of reality were overlaid with an invisible, never ending grid? When would such a grid bend and twist, and how? When would it be broken? And how are the rural North Carolina roads I walk every morning like lines erratically marking out the land I inhabit?

With these wondering in mind, I paint to obscure, wreck, disassemble, reiterate, build off of, embellish and reinvent the initial gridded layer. The process of painting is an exercise in turning the simplicity of the original visual structure into a new and unexpected version of itself—one often illogical in pattern, loudly colorful, deeply hand made and at times, profligate.